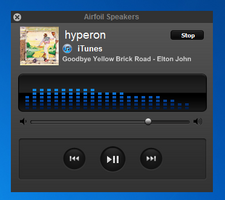 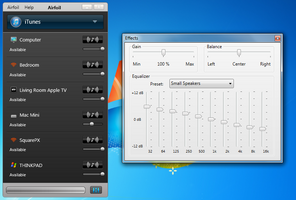 Advertisement
Airfoil lets you send audio from different apps, such as iTunes or QuickTime Player, to devices such as Airport Express, Apple TV, iPhone, and other computers on the local network.

The speakers provided by Airfoil can be used on Mac, Windows, and Linux; as well as on devices such as the iPhone and the iPod Touch. The audio is played in s synchronized fashion on all the devices connected to the network.

The way Airfoil works is very simple: first, you select which application you want to use as the audio source, then you select which devices will receive the Airfoil signal. This tool also includes a video player that lets you send the audio from the clip in a similar fashion.
Reviewed by Álvaro Toledo Translated by Stanislav Sousek

You don't have to install the program to listen to the signal coming from Airfoil, you just need its Speaker software. Access this site to download it. Note: For Windows XP or Windows Vista.
Advertisement

Why is this app published on Uptodown?
(More information)

There are opinions about Airfoil yet. Be the first! Comment